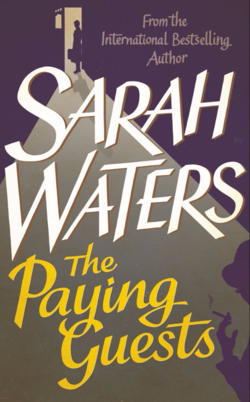 It’s 1922 and the war has taken its toll. Frances Wray and her widowed mother are struggling to make ends meet but are determined to remain in their aging home in a quiet, wealthy area of South London. When they are forced to take in lodgers, the recently married Lilian and Leonard Barber are introduced into their humdrum lives. Mrs Wray is concerned that the young and modern couple are going to cause disarray with their enjoyment of the gramophone and penchant for staying out late. Frances is more positive about the possible effects of their intrusion. Nobody though could predict the series of events to follow from the two families combining.

Sarah Waters has been a favourite author of mine since I read Fingersmith, which I still maintain is the best example of her writing. Waters has the wonderful capability to combine the genres of historical fiction, mystery, crime and romance with captivating results. The Paying Guests is equally evocative of the era it is set in. It’s set in the aftermath of World War 1.  Previous to the war, women were expected to follow a set pattern leading to marriage and mother hood. The disruption caused by the war to women’s roles allowed Francis more freedom and now she is expected to return to the old pattern by her mother who is unable to accept change as progress, she is struggling.

Frances is a fantastic character. Never married and uninterested in pursuing a husband, she simply doesn’t fit in with the society she is expected to mix with. She is a constant source of worry for her mother who, having lost two sons in the war, would like nothing more than for her only daughter to start a family of her own. Frances has a bit of a past too. She has been in trouble with the law as a young woman and when a relationship with a close friend was proven by elicit letters to be of a romantic nature, her mother did her best to cover it up and move forwards from it.

Lilian is another woman who seems unhappy with her circumstances. She is seemingly far more fragile than Frances, although there are parts of the novel that made me question this. There were points when I wanted to give Lilian a shake and tell her to think about her actions more carefully but, if she had, she wouldn’t have been the wonderfully unfathomable character she is. When Frances extends an offer of friendship, she grabs it with both hands. From this point, after a slow start, the novel picks up speed. There are all sorts of twists, turns and developments in the relationships that lead up to a climax that had me sat up straight, biting my nails. This scene in particular is really well-written; it’s emotional, graphic and shocking, and made more so by the investment I had made in the two women.

My only criticism would be that I found the ending to be disappointing in some ways. I wanted to know more about what would happen to the characters. It felt like there were too many loose ends left lying around. Maybe this makes it harder to forget though. I certainly won’t be forgetting this read for a while.