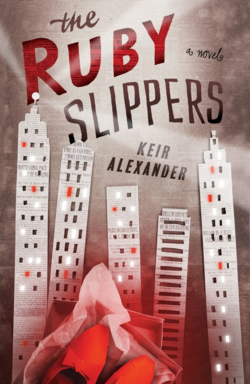 Old Rosa wanders the streets of Manhattan, her faithful dog Barrel by her side, the people around her avoiding her at all costs. Rosa stinks, having long ago neglected herself and her appearance. Rosa doesn’t bathe and she lives in a hovel. Her once lovely apartment is crammed with her hoarded possessions, from old furniture to abandoned paperwork and rotting food. Nobody speaks to Old Rosa, shying away from the woman she has become. Those that once tried to speak to the eccentric woman have given up.

And then one day, Rosa is knocked over during the St Patrick’s Day parade. Rosa has one living relative, her nephew Michael. While his aunt is in a coma, Michael begins the arduous process of bringing her apartment into order and, in doing so, he discovers a pair of ruby slippers tucked away in a hat box. The slippers are genuine Wizard of Oz slippers used in the making of the movie. As well as the slippers – reputedly worth a fortune – he finds the handwritten account of Rosa’s life. These slippers bring together a bunch of seemingly unconnected people of New York, each with their own story and struggles.

I was intrigued when I read the blurb of The Ruby Slippers and couldn’t wait to discover the story behind the lonely old woman, but this aspect of the story felt a little flat for me. It was slow to get into Rosa’s story and even then I wasn’t as compelled by it as I thought I would be. For me, it wasn’t Rosa’s story that held the intrigue, but the story of those who come into contact with the slippers.

There is deli owner Michael, librarian James, disillusioned Harrison, mean-spirited McBride and teenager Siobhan. To begin with, their stories don’t seem to gel, but little by little they start to come together. I wasn’t particularly drawn to any of the characters as they each had their flaws, and while this makes them more human, it created little empathy from me as a reader. I was so angry with Michael’s wife, Grace, when they disagree about what to do with the slippers, which made me start to root for Michael, but he was so weak that I wanted to shake him by the shoulders and eventually stopped caring when it became clear he was going to allow his family to walk all over him. Out of all the characters, I enjoyed Siobhan’s story the most and wished her well.

I thought the writing was good and although it could go off on a slight tangent at times, I enjoyed it. But I didn’t care about the characters enough to love the book.