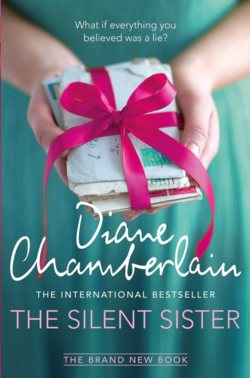 The death of her father has brought Riley MacPherson back to New Bern, North Carolina. Unfortunately her childhood home does not hold many happy memories – Riley’s family have never recovered from the suicide of her older sister Lisa. Riley was only a toddler when tragedy struck and has had to live with two parents who rarely mention their eldest child and a brother who has a lot of built up anger.

Now that she is back in her hometown she is determined to reconnect with her brother. Perhaps reminiscing over their shared past will help? However, Danny has serious unresolved issues and has no intention of getting over them any time soon. Riley intends to take her time sorting through her father’s belongings, too, but when a family friend gets involved everything seems to be moving too fast. This unwanted help leads Riley to unearth more than she bargained for, as in amongst the collectables and old paperwork are newspaper articles, which reveal that the reason for Lisa’s suicide was not depression. Riley’s whole life has been based on a lie; she even became a counsellor to help other teens. No wonder Danny is unable to forgive their sister for ruining their family’s life – she was a murderer who took the coward’s way out.

Riley knows that her family has not been as happy as it can be, but it’s not until she begins clearing out after her father’s death that she realises how sheltered her life has been. In amongst the grief of her sister’s suicide she had a really close relationship with her brother Danny, but as the years have progressed they have grown apart and Riley is desperate to rekindle her brother’s love. I really felt sorry for Danny when it came to light he had doubted and ultimately dismissed his own memories of Lisa thanks to his mother insisting they were his imagination rather than truth. Years on he quite rightly blames his mother’s actions for his mental issues.

In the first part of the book we follow Riley as she unwittingly gets closer to finding out the truth about her sister’s suicide. Then just as she makes a major discovery, another bombshell is dropped, which shatters everything and she is left to piece together the fragments once more. The second part flashes back to Lisa’s final days before leaving her family behind and we get a further insight to exactly what happened. The third part sees Riley armed with all the knowledge of the past that had been kept from her before.

Whilst reading I did find that I worked out how the story would unfold well before it did, however, despite this, I was still eager to read on. I may have been able to figure out the twists and turns, but I was intrigued to read about the minute details that lead up to the ultimate outcome.

The Silent Sister is a true reflection of how fragile family life can be. The father/daughter relationship depicted, in particular, pulled at my heartstrings. Diane Chamberlain certainly knows how to write compelling family drama full of moral dilemmas, which make the reader think.