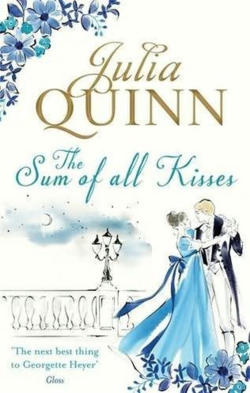 Lady Sarah Pleinsworth blames Lord Hugh Prentice for her lack of marriage. She has never met the man, but Hugh tarnished her family’s reputation when he challenged her cousin, Daniel, to a duel. Hugh was shot in the leg during the duel, leaving him dependant on a cane for the rest of his life, and Daniel was forced to flee the country. Because of the ensuing scandal, Sarah was forced to miss the season and therefore remains unmarried and without any marriage prospects.

Hugh has never met Sarah before, so he is confused by her anger towards him when they meet at a mutual acquaintance’s wedding. The pair get off to a rocky start, which is made worse when they end up spending a week together as they await a second wedding, this time of Sarah’s cousin, Daniel. During the week, however, Sarah gets to know the man behind the scandal and she feels her hatred for Hugh slipping away.

This is the first novel by Julia Quinn that I’ve read, but I really like her writing style. The book is full of humour, from Sarah and Hugh’s sparring to her relationship with her younger sisters. Hugh didn’t have the best upbringing, the details of which we learn as the book progresses, and he blames himself for his injury. He’s quite hard on himself and doesn’t feel he deserves to find love, especially now his movements are reduced due to his leg injury, but I thought he was an honourable and kind man once he let his guard down. I think he was perfectly matched with Sarah, who could see the man behind the injury once she got over her bitterness towards him.

I thought The Sum of All Kisses was a fun, romantic read with some fantastic characters. As well as the growing relationship between Sarah and Hugh, I loved the interaction between the Pleinsworth sisters, particularly Frances, the youngest of the family.