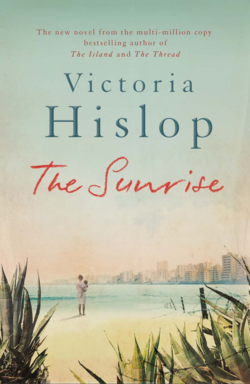 Savvas Papacosta has big plans. Not content with one hotel he has now found the perfect spot to build another combining breathtaking views with opulent luxury. It is 1972 and Famagusta is a popular holiday destination. With his glamorous wife Aphroditi by his side, Savvas is determined to make The Sunrise the hotel to beat. Whilst her husband is fully occupied with his new venture, Aphroditi is bored and feels redundant so she starts to seek happiness outside of the confines of her marriage.

Greek and Turkish Cypriots may work together in harmony at The Sunrise, but elsewhere tensions are rising. It all comes to a head when a Greek coup plunges the island into chaos. Turkey invades Cyprus and Famagusta is shelled. Locals leave in their droves and holidaymakers flee The Sunrise for the safety of home. Even Savvas and Aphroditi are forced to leave their beloved hotel. In amongst the ruins only two families remain and they will hang onto their homes as long as they can.

One of my favourite books of all time is The Island by Victoria Hislop and ever since I eagerly anticipate her next release. As with all her previous books, The Sunrise weaves true life historical events into the lives of fictional characters. Much like the island of Famagusta split in two, this book is written in two parts – before and after the invasion. We see the rise of the most palatial hotel Famagusta has ever seen and watch as golden couple Savvas and Aphroditi are torn in different directions away from each other. The Sunrise is the place to be and be seen and they are used to mixing with the rich and famous every day. Elsewhere on the island Greek and Turkish Cypriot families live a simpler life, but many are intrinsically linked to the fortunes of the new hotel.

Through reading, I discovered a part of history which I knew very little about and the author managed to convey the despair and fear felt by innocent families caught up in the middle of conflict. However I do feel that too many characters were included, so much so that at times I found it hard to follow and keep track of whose family members were who. As such I did not feel any true empathy with anyone as I prefer when there is one core character that we follow continuously rather than flitting in and out of people’s lives. I did enjoy reading about Aphroditi and was intrigued by her as I thought she had more substance behind her shallow exterior, but unfortunately I was wrong and there was very little to her after all.

The Sunrise is an interesting insight into an important part of Greek history without bogging down the reader. I was just disappointed that I did not feel the same connection with the personal aspect of the story as with previous books, mainly because I felt there were too many points of view. However, if you usually shy away from historical fiction Victoria Hislop is the perfect place to start, as she blows the cobwebs from stories long forgotten.