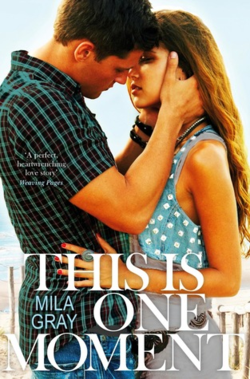 Didi Monroe’s first day interning at a Californian military hospital doesn’t quite begin as she expected. Being covered in yoghurt after an altercation with Lieutenant Noel Walker isn’t the start she hoped for. Still, there has been an upturn in her personal life in the form of Hollywood heartthrob Zac Ridgemont, and the internship is helping her earn her doctorate in clinical psychology. Wracked from guilt following an ambush while on patrol, Walker refuses all help that Didi offers. A relationship with Walker is strictly out of bounds, but Didi can’t help but be drawn to Walker and try to give him the happily ever after he is adamant he doesn’t deserve.

I finished This Is One Moment by Mila Gray in the early hours, and I didn’t know where to begin when writing this review. The novel is beautiful and heart-breaking and a story that has made an indelible impression. I wasn’t expecting to have such a reaction to This Is One Moment, which is testament to Mila Gray’s creation of nuanced, dimensional characters and careful handling of such a sensitive subject.

Didi knows that her time at the military hospital is going to be tough, although she couldn’t have anticipated the challenge that Walker presents from her first day. Walker is closed off to everyone in the hospital. His parents aren’t close by, he and his brother haven’t talked in a long time, and his fiancée Miranda has decided that their relationship isn’t going to work. Walker has Sanchez, a fellow Marine, who owes his life to Walker’s bravery. Walker can’t begin to imagine a future, believing that no one will want a bruised and broken man. Didi isn’t going to let Walker give up on himself, and a friendship forms between the two. Despite Didi knowing she shouldn’t be involved with a patient, and Walker insistent that there is no future for him, the friendship deepens into a real emotional connection and attraction that neither of them can ignore.

Didi is incredibly kind-hearted and compassionate, full of empathy and a real desire to help the patients in the hospital. The gestures that she makes for Walker are very heartfelt, such as giving him her iPod to listen to music and audiobooks, soothing him when he has another nightmare and taking him out sailing. It is Walker particularly who has stayed with me. He is brave, courageous and strong but he is also at his most vulnerable. Initially, he is rude and recalcitrant in front of Didi, feeling like he has lost everything, including his sight, following the ambush. But the real Walker is kind and caring, and very sweet.  As the youngest lieutenant in the Marines, Walker takes the responsibility for the deaths of his friends. He can’t, or rather won’t, let go of the guilt and it has started to adversely affect his progress.

The connection between Didi and Walker is incredibly intense and emotional. Their bond runs deep, and it transcends a skin-deep attraction. They fully learn about each other, inside and out, physically and emotionally. As Walker gets to know Didi without being able to see her, Mila Gray creates a tangible sensual atmosphere as their connection strengthens.  They know each other better than anyone else does.

The subject matter involved in This Is One Moment needs to be handled with sensitivity and understanding, and Gray skilfully achieves this. The novel really delves into the life of the hospital, through art and occupational therapy classes, and most crucially through the other characters, particularly cheeky, irreverent Sanchez. Sanchez is an important role model for the other patients, to remind them that there is always something worth living for. Knowing that the hospital and its patients are representative of real life was often heart-rending, especially when confronted with the realities of war, through PTSD, amputation, depression, and phantom limb syndrome. Although it’s hard to read about these issues, it’s vital that they are raised and especially in such a sensitive way as portrayed by Mila Gray.

This Is One Moment is a beautiful, emotional, romantic love story, and will stay with me for a long time to come.