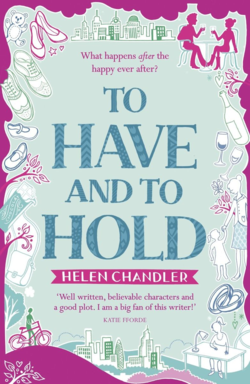 Three marriages, all of which started out with such high hopes, seem to have gone awry in unexpected ways. On first appearances, Ella has it all. Her husband is supportive, her children are loved, yet she feels something is missing and is determined to find it before life moves on without her. Imogen and Pete, meanwhile, seem to have a laid-back lifestyle in common, both agreeing on the importance of the environment and not working too hard. Once baby Indigo came along, however, Imogen starts to see the world in a new light, but Pete isn’t so keen to change his ways. Fifteen year old Phoebe has watched her parents’ marriage deteriorate before her eyes for years, often wondering if her weight issues and lack of closeness to her judgemental mother is to blame. When she overhears their break-up talk, she decides it’s time to search for her own happiness. After all, they probably won’t even notice.

Already being a fan of Chandler’s writing, I was thrilled to see this arrive on my doorstep. Another set of fresh, interesting voices! The three sets of characters are all deftly linked through the storylines. There are no martyrs here; all the characters, from seemingly well-grounded school-teacher Callum to nature-loving, do-gooder Imogen make mistakes. As with Chandler’s previous novel, the characters are well-rounded, real people. The children play rich parts throughout the novel, my favourite being Phoebe. She provides a welcome, under-represented voice for a positive teenager in fiction. Chandler explores issues of being overweight and dealing with the cruel consequence of bullying with sensitivity. Different characters broach the subject from contrary views, too, showing an understanding of the emotional and physical effects of weight-struggles. Phoebe’s voice is valid and honest, especially when she talks to her equally lovely friend, Becky. This book would definitely be an option for older teenagers struggling with self-esteem issues simply due to the strength of Phoebe’s voice.

Responsibilities as a parent are also explored through Pete, who lazily shirks his fatherhood in exchange for computer games and drugs, highlighting quite a modern problem for some young fathers. Given this, the novel is not void of good male role models and there does seem to be a decent balance of differing views, keeping the reader hooked with variety.

The loose ends are tied up in an original manner at the end, leaving the reader with the closure needed to move on from this new array of wonderful characters.

To Have and to Hold calls upon you to appreciate the subtle benefits that may be forgotten in a busy family home. It is questioning and uplifting. I’m already looking forward to the next offering from Chandler!