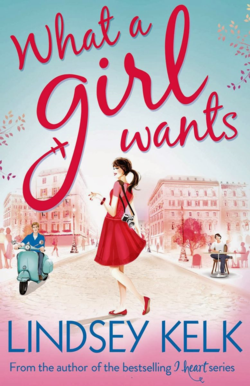 Not so secret confession: I bloody love Lindsey Kelk! Almost as much as Ryan Gosling without his shirt on. Almost. Her books are so fresh and relatable to a single girl living in a big city and juggling a career while trying to find the dateable needle in the haystack of wholly unsuitable men. And Lindsey's hilarious writing style and unique turn of phrase has made me spit out my drink on more than one occasion. I also learn a wealth of snort-out-loud funny new words while reading her novels, such as cockwomble, which I now make my mission to use in every-day conversations. It's like the SATs, but better and more practical because these are phrases I can actually imagine coming out of my mouth, rather than random seven-syllable concoctions that just make the Oxford Dictionary unbearably bulky.

What a Girl Wants (not to be confused with the guilty-pleasure Amanda Bynes film of the same name) continues on from where the previous novel, About a Girl, left off. Tess has just returned from her life-changing trip to Hawaii, where she initially only went to briefly escape from the madness in London, while impersonating her crazy but well-connected roommate Vanessa, but where she also ended up falling in love with a new job and a new man. Now back in London, she's breaking into her own flat to get some essentials – basically a suitcase full of M&S pants – and escape to her best friend's place so she can figure out what to do next.

After being made redundant will she try to find another role in advertising, a job she has always enjoyed and was very good at, or does she want to pursue a career in photography, the work she fell in love with in Hawaii? And with her best friend Charlie finally confessing his love for her, after she'd been pining after him for ten agonisingly long years while he was dating every female with two legs in the city, will she happily flop into his arms and enjoy her happily ever after or is she still holding a shred of hope to rekindle her Hawaiian fling with hunky but emotionally distant journalist Nick?

I have a huge girl crush on Angela, the main character in Lindsey Kelk's mega-popular I Heart series, but I think I'm falling for Tess even more. Sure, she is unintentionally hilarious as she finds herself in the most random situations – she even ends up behind bars twice in the space of a single book – but she's also an inspiration and incredibly likeable, someone any girl in their 20s or 30s can relate to. Only two books into this new series and I already feel like I've found a life-long friend in Tess.

As for the two swoon-worthy men in her life, at the start of this novel I wasn't sure if I was Team Charlie or Team Nick because they were both pretty big cockwombles (see what I did there?) and I felt she deserved much better. However, despite a lot of going back and forth between the two dishy men and indecisiveness from Tess for most of the story, after reading this book in a single sitting – the only way to read a Lindsey Kelk, be warned that once you pop you can't stop – I ended up being firmly on Team Nick. He is damaged goods with trust issues, but oh my what I wouldn't give for the chance to heal his emotional wounds!

The story has moved from the tropical setting of Hawaii to another enticing summer destination; Milan. Thankfully the location change doesn't mean that none of the other characters from the first book make an appearance, as we see fashion magnate and Tess' surrogate-grandfather Al again as well as newfound friend Paige, though best friend Amy plays a much more prominent role this time around. And of course there is the fabulous Kekipi, the best gay man in history. Ever. I wish he was real so he could take me out shopping before we embark on a karaoke bar crawl. I normally despise karaoke, but I think Kekipi can make me actually enjoy embarrassing myself in front of a crowd – or at the very least he'd ensure I'm properly wasted by the time I make my way onto stage so I wouldn't remember my cringeworthy performance the next day.

This utterly amazing book is definitely the one you want to be reading this summer, whether you're spending the holidays at an exotic location yourself or you're trying to catch the sporadic sun rays that may make their way into your own backyard. Once you open the pages of What a Girl Wants you'll instantly be transported to a beautiful Palazzo in Milan where you'll spend a sidesplittingly funny few hours with Tess, her fabulous friends and two incredibly gorgeous men. Sounds like the perfect summer getaway to me.