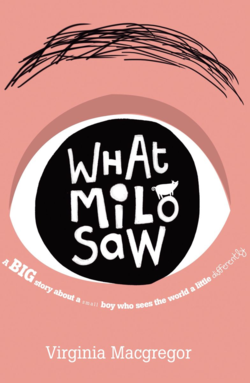 Milo Moon is nine years old and, apart from caring for his elderly Gran and having a pet pig called Hamlet, he has retinitis pigmentosa, a disease that causes his vision to fail and that will one day leave Milo blind. Milo’s world is vision through a pinhole, and thanks to his Gran he has developed his other senses to cope with the loss of sight. He also has an eye for observational detail because of his lack of peripheral vision and he zooms in on the things that really do matter.

When it all gets too much in the household (his father has moved abroad with his new girlfriend and his Gran’s old age is causing her to forget certain things), his Gran decides to help Milo and his mother out by setting fire to the kitchen and therefore causing Milo’s mum Sandy to put her into an old people’s home.

Alongside trouble at school (Milo’s teacher is very concerned about his lack of progress) and trouble at home with his mum, Milo discovers there are even bigger problems at his Gran’s new home, which is run by a cruel and bitter woman called Nurse Thornhill. With the help of everyone at the home and his mother’s support, he uncovers the truth about how the old people are treated and becomes a local hero overnight.

This book was absolutely delightful. It was extremely easy to read, with chapters less overwhelming in size compared to most standard novels. This meant it was very easy to pick up and put down, but to be honest, I didn’t put this book down for long! Milo’s character is simply wonderful. He is quirky and bright and the way it is written is so in-tune with a child’s mind.

I have to say that the hardback version also felt so good to read; it was sturdy and the whole feel and look of the book works so perfectly. I also loved the little pig silhouettes at the start of each chapter from Milo’s perspective – really charming and sweet. I loved the storyline and I hoped certain relationships would develop in the way that they did, but not in a predictable way, especially Sandy’s relationship with Tripi, the chef at Forget Me Not care home.

Milo’s relationship with his Gran was absolutely adorable. I loved the moments they shared together and their joint fondness of Hamlet the pig. I really enjoyed reading about their strong connection, especially the moments when Milo could feel what she was feeling and vice versa. The fact that his Gran has a notepad to write her thoughts and feelings on instead of speaking, too, was really interesting, humorous and sometimes heartbreaking. I really loved the quirkiness amongst all the different characters.

I would strongly recommend that everyone should read this book; it holds laughter and tears, but above all, it has something similar to a beating heart.

This is not a book to be missed!