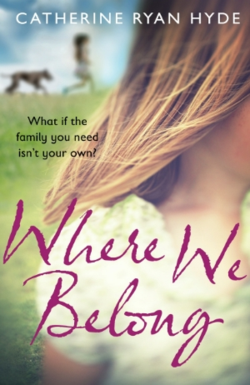 Fourteen-year-old Angie hasn’t had an easy life. Her father was murdered at a young age and her sister Sophie has a form of autism and requires a lot of care. The family have been forced to move around a lot due to the uncontrollable noises Sophie makes and are now moving in with Angie’s Great Aunt Vi. Their new neighbour has a Great Dane, which Sophie takes a liking to and spends hours watching her through the fence. The dog seems to have a calming effect on Sophie and Angie begins to think they can finally settle down in one place. Until the neighbour reveals he is moving away. Knowing Sophie will revert to her old ways without the dog, Angie’s mum packs up their meagre belongings and tries to track the neighbour down.

Where We Belong is quite a sad tale, with Angie at its centre. Angie hasn’t really had the chance to be a child as she has the responsibility of taking care of Sophie, which can be difficult. She moves around a lot and doesn’t have any friends and although she has big dreams, she doesn’t believe she will ever be given the chance to achieve them. Then there is Paul, the grumpy neighbour who also doesn’t have many friends. Although there is a massive age gap between the pair, he and Angie strike up a friendship, which was nice to see. The pair haven’t had much happiness in life so I enjoyed seeing the bond strengthen between them.

I found Angie’s mother to be incredibly selfish as times and wanted to tell her to grow up as she constantly heaps so much responsibility on Angie’s young shoulders. But I also felt for her at times too as she was in a hopeless situation that she can’t seem to find her way out of and is struggling to feed her children and keep a roof over their heads.

Where We Belong isn’t a laugh-a-minute book. There is hardship, grief and despair throughout but I did enjoy reading it and finding out what would become of Angie and Paul’s friendship. Paul is a very closed off person and at times I found this a little off-putting but on the whole I thought he was a great friend for Angie and came into her life when she needed him the most.