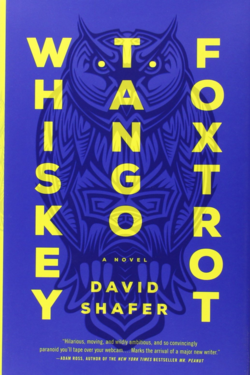 In Burma, charity worker Leila Majnoun is struggling to make a difference in the country when she witnesses an event she wasn’t supposed to see. In Portland, Oregon Leo Crane is having a bad day. Turning up late for work at his job at a pre-school after falling off his bike en route, Leo is fired and his life begins to spiral out of control. His former best friend Mark Devereux is about to take part in a chat show in New York City, plugging his self-help book, Bringing The Inside Out.

These three people are being watched by the Committee, a global organisation that wants to privatise all information. Leo is already paranoid about being watched and followed, but maybe his fears aren’t so unfounded.

I really struggled to get into Whiskey Tango Foxtrot from the beginning but, as there are three completely separate characters to get to know, I thought this was reasonable. However, as the book progressed, my struggle didn’t ease at all. The book is bogged down with so much irrelevant detail that I had great difficulty clinging onto any sort of plot. At times chaotic or meandering down unconnected paths, I was often left bewildered and wondering what the point was – and this feeling remained throughout the novel.

I didn’t particularly warm to any of the characters so I didn’t feel invested in the story, which made it a difficult, sluggish read for me. To then reach the end without any real conclusion was even more disheartening.

I don’t know if this is going to be a series, which would go some way to explain the sudden, inconclusive ending, but I couldn’t help feeling disappointed – by the ending and the book as a whole.