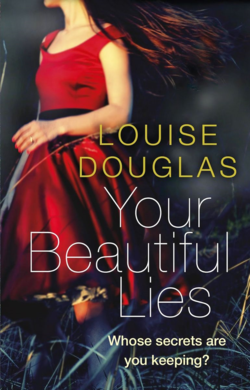 It’s 1987 and the villagers of a South Yorkshire town are caught up in the middle of miners' strikes. Annie Howarth’s father and brother are amongst those affected but she is preoccupied with the fact that her ex-boyfriend is back in town. Tom Greenaway was the love of Annie’s life until he was convicted of manslaughter and she turned her back on him.

As soon as Tom returns he is determined to make contact with Annie and even rekindle what they once had. However Annie is now a policeman’s wife and she has buried what feelings she ever had for Tom long ago. She made her choice when she married William Howarth and there is no turning back, but maybe she should listen to Tom’s side of the story, maybe he is innocent? Just as Tom is getting through to her another woman is murdered on the moors, who should she trust her policeman husband or convicted ex?

With this book Louise Douglas has deviated from her usual lighter romantic fare, but instead of being dark this story ends up dreary. I usually enjoy being taken back into another time era, but throughout I never really got a real sense of the eighties, I just felt like the author was simply listing as many different pop culture references as she could. The daily minutiae of Annie’s life is mundane and consists of looking after an ungrateful, surly daughter, batty mother in law and an uninterested husband. It's no wonder then that when her ex-love Tom reappears in town it doesn’t take Annie long to let him back into her life. However even when she becomes involved in an illicit affair she isn't any more interesting and the occurrence of a murder on Tom’s return is simply predictable.

Obviously the book’s title refers to secrets and lies, which there are a few but none particularly surprising or shocking. I did not connect with any of the main characters, but kept reading as thought more would be revealed, in particular I thought there would be more to discover about Annie’s daughter’s strange behaviour, but no. I did feel sorry for Annie’s brother, Johnnie, as the poor man was caught up not only in the strike tension but also his sister’s troubles and unfortunately he came out of it worst of all. I was also interested in reading about Annie’s friend Janine as she struggled with new motherhood and a workaholic husband and perhaps hers would have made a more interesting viewpoint to follow the events.

The plotline had potential but I felt it became too bogged down with the mundane, so much so that you forget a murderer is even at large.