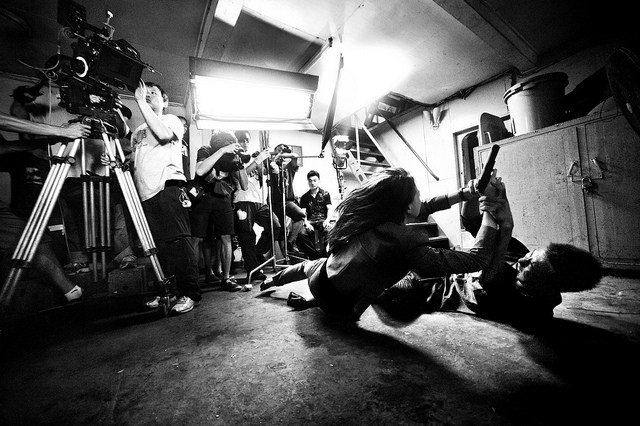 Action scenes can be tricky to get right in a story. On one hand, if your action scene is done well, it will serve to add suspense to your story and keep the reader glued to the pages. There is nothing more engaging than reading an action scene in a story where the protagonist’s life is in danger, or they are fighting their nemesis in order to save someone loved or important. However, if your action scenes are too extreme, or last too long, the reader will get overwhelmed and either skip the scene, or stop reading. This is why we’ve gathered some tips on how to write action scenes that will keep the reader interested, instead of having him or her skim over to the next part.

When it comes to action scenes, you have to remember that the more there are in your story, the more your story will suffer. They will take attention away from the drama, dialogue, and character development arcs. This is why action scenes have to be sprinkled throughout your story, and they shouldn’t overtake your story, since a story shouldn’t be based only on action, it needs drama and dialogue and reflection.

It goes without saying that in an action scene, the writing pace will be faster, the sentences shorter and to the point. Forget about being too descriptive – you only need to give the reader enough information to know what’s happening, where it is happening, and how everything is being played out, and be very precise. Forget about lengthy sentences, descriptive metaphors and reflective thoughts of the narrator, or the protagonist, because there is simply no time in an action scene for that. This means that your writing style will change a bit, and probably be toned down, appearing minimalistic even, to adjust to the pace and purpose of the scene.

The action scene helps build suspense, and moves the story forward, that’s true, but you cannot have action scenes just for the sake of having them in your story. Make sure they play a role in the plot – for example, your protagonist probed into something he shouldn’t, and the action scene, where he fights for his life is a direct result of his actions. However, to make the scene count, your protagonist should discover something about his attacker, something that helps him solve the mystery, and move a little bit forward on his quest.

Every action scene in your novel has to be different. If you’ve decided to sprinkle them in your story, then the readers will pay attention and remember them easily. So, you cannot write an action scene at the beginning and an action scene near the end of your novel in a similar way. The one at the beginning should be just a warm up – the action will show a little bit of the power of your protagonist (in both muscle and wit), but in the action scene in the climax of your story, your protagonist should go full steam ahead and show all of his prowess.

In an action scene, your protagonist will have to make quick decisions, based on his previous experience. May be he will have to choose to save someone, instead of chase after the antagonist, and maybe he will choose the opposite. In this kind of action scenes, you can show aspects of your characters, without them saying a word. Also, if the protagonist makes a mistake in the first action scene, then he will make sure not to make that mistake again in the following action scenes. Additionally, don’t forget to include some of the character’s inner thoughts in the scene. It helps the readers get even more immersed into the scene, and it will make them connect more with your protagonist.

Image credit: Jonathan Kos-Read on flickr and reproduced under Creative Commons 2.0[author] [author_image timthumb=’on’]https://writingtipsoasis.com/wp-content/uploads/2014/12/photo.jpg[/author_image] [author_info]Georgina Roy wants to live in a world filled with magic.
As an art student, she’s moonlighting as a writer and is content to fill notebooks and sketchbooks with magical creatures and amazing new worlds. When she is not at school, or scribbling away in a notebook, you can usually find her curled up, reading a good urban fantasy novel, or writing on her laptop, trying to create her own.
[/author_info] [/author]