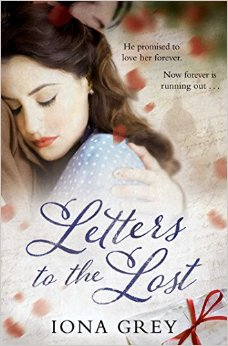 I love a book set during the Second World War. There is something so appealing about that time. Of course, it was a terrible time for the country but … if I could go back to one time period in a time machine, then that would be where I'd go. As that is not possible, the next best thing is to read books about it …

1. Letters to the Lost by Iona Grey – It is 1943 in the ruins of blitzed London. Stella Thorne and Dan Rosinski meet and begin an affair. Theirs is a love so deep, but they are parted. Now, 70 years later, Dan wants to find the women he loves. Before it is too late.

2. The Guernsey Literary and Potato Peel Pie Society by Mary-Ann-Shaffer – Juliet Ashton is an author and doesn't know what to write next. She receives a letter from Dawsey Adams of Guernsey and they begin a correspondence. Soon he is telling her about the Potato Peel Pie Society some Guernsey residents formed during the Second World War, and Juliet decides she has to meet the unusual little group for herself.

3. The Darkest Hour by Barbara Erskine – The Battle of Britain has just begun, but Evie Lucas is making endless sketches of a pilot called Tony. Many years later Lucy, a widowed art historian, is trying to uncover the mystery surrounding a painting in her home.

4. The English Patient by Michael Ondaatje – Four people are brought together in an Italian villa during the Second World War. One is an unrecognisably burned and nameless Englishman.

5. Code Name Verity by Elizabeth Wein – A YA story about two female friends during World War Two – one of whom is captured by the Gestapo.

6. Suite Française by Irène Némirovsky – This novel is in two parts and is set during the year that France fell to the Nazis. The first part is about a group of Parisians as they flee the Nazi invasion. The second part follows a small rural community under occupation.

7. The Secret Keeper by Kate Morton – In the 1960s, teenager Laurel is hiding in a treehouse when she witnesses a shocking crime. It is now the present and Laurel is a well-loved actress, but she is haunted by the past and, wanting to know more about what she saw, she discovers the story of three people: Dorothy, Vivien and Jimmy in wartime London.

8. Captain Corelli's Mandolin by Louis de Bernieres – This novel is set in the early days of the Second World War. Captain Antonio Corelli is an Italian officer in command. It isn't long before he and the doctor's daughter, Pelagia, are having an affair.

9. The Boy in the Striped Pyjamas by John Boyne – Bruno is a nine-year-old German boy and knows nothing about the cruelties that are going on in the rest of Europe at the hands of his country. All he knows is that he has had to move from a nice house in Berlin to a house in a desolate area. Then he meets Shmuel, a boy who wears striped pyjamas and lives on the other side of the fence.

10. The Dandelion Years by Erica James –  Saskia lives at Ashcombe, in a rambling pink cottage, where she has lived since she was a child, in the Suffolk village of Melbury Green. She's now grown up, and a book restorer. Whilst working she finds an old notebook carefully concealed within the pages of an old bible. She is drawn into its story, which is about wartime love.

What are some of your favourite books set in the Second World War?