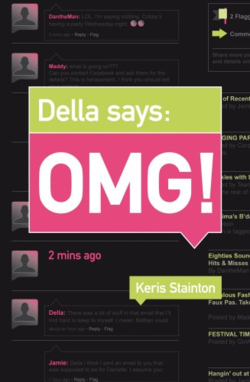 A short while ago, broadcaster and columnist Caitlin Moran, in an interview with the Bookseller about books directed at teens, said: "It’s always about teenage boys going off and having amazing adventures. You don’t see teenage girls anywhere unless they’re being bitten by vampires so I wanted to write about a funny, weird teenage girl having adventures, particularly sex adventures."

This caused a bit of a furore with Young Adult authors out there who have already written hundreds of books about teenage girls having adventures, including sexual adventures. Thus, a hashtag was created – #caitlinmoranshouldread – and soon Twitter was filling up with YA recommendations about strong, female characters.

The great thing to come out of her remarks is a fantastic reading list of YA books featuring young, feisty girls having great adventures, sexual or otherwise. What's even more perfect is, you don't have to be a teenage girl to enjoy these books. (Phew.)

I only have space for five books here, but check out the hashtag #caitlinmoranshouldread on Twitter for many more recommendations.

1. Della Says: OMG! by Keris Stainton – It seems only fair we start with this book as Keris was the author who created the aforementioned hashtag not long after reading Moran's remarks. Della Says: OMG! is about a teenage girl, Della, who finds her diary has disappeared after a party. Soon enough, scans of her diary are appearing on Facebook, to her complete mortification. Who is doing this to her? And will it scare off her first proper romance?

2. Eleanor & Park by Rainbow Rowell – Set in the 80s, this is the story of teenagers Eleanor and Park. With a soundtrack of Joy Division and The Smiths and a backdrop of X-men comics, the two teenagers develop their friendship and love. Kirsty, Novelicious Ed-in-Chief adores this book.

3. The Disreputable History of Frankie Landau-Banks by E. Lockhart – From what I can gather, anything by E. Lockhart is a must, but this one in particular caught my eye (yet another book to be added to my huge TBR pile). Frankie Landau-Banks has gone from geeky to gorgeous and all of a sudden the boy she'd admired from afar is interested in her. However, she soon learns that Matthew is not all he seems – he belongs to an all-male secret society. Then Frankie starts to keep a few secrets herself…

4. Adorkable by Sarra Manning – I've read all of Sarra's adult books but haven't, so far, tried any of her YA. This may all change with Adorkable. Jeane is quirky and feels she doesn't really fit in. Thanks to the internet, however, she has become a blogger and has half a million followers on Twitter. A great female character with romance, too.

5. Code Name Verity by Elizabeth Wein – A story about two female friends during World War Two – one of whom is captured by the Gestapo.

What Young Adult books featuring adventurous and feisty heroines would you recommend?