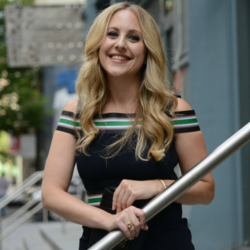 It wasn’t actually a book that changed my life – it was a play. Now, over the years, I have read moment-altering, life-enhancing books: Jojo Moyes' Me Before You and The Girl You Left Behind, Geraldine Brooks' People of the Book, David Nicholls' One Day, and Chaim Potok's The Chosen are a few that come to mind. But no one touches me like Oscar Wilde does in The Importance of Being Earnest. Like some of us are attracted to Yogi Berra’s “Yogisms,” I am drawn to Wilde’s words.

With a penchant for English humor (or humour, I should say!) and a love of the British accent (my British boyfriend will absolutely roll his eyes when he reads this, though I must note that my love of Royal culture and Mr. Wilde came way before I met him), the parody and ridiculousness of Earnest coupled with the eloquence of how it’s told are what make me read it over and over, and see the play whenever it’s playing. Earnest opened my eyes to a different kind of writing and storytelling. And it inspired me to write my novel in as visual a way as I would write a play. To write something with the subscript of: A Trivial Comedy for Serious People that transcends time (Earnest was first performed in 1895!) and is still relevant astounds me. Aren’t we still transfixed by literary protagonists and real people who live their lives in fictitiously to escape life’s burdens or consequences? To tell this particular story in such an absurdly poignant way still transfixes me.

And Wilde’s quote: “Be yourself, everyone else is taken,” is a big theme for my novel, What Pretty Girls Are Made Of and in how I try to live my life. “Choose happiness,” I like to say. I bet Mr. Wilde would agree.

Lindsay's book, What Pretty Girls Are Made Of, is out now!