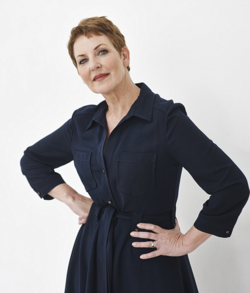 I'm not very keen on those diagrams where one, shouted word in a box is linked by a fat, single direction arrow, to one, shouted word in another box – cause and effect. I guess it is true that if you whop your toe against a tree [WHOP] it is likely to lead to  a sore toe [PAIN], but even then, there's the thickness of boot variable. It is my interest in these variables that gives me pause when I am asked to name a BOOK that has CHANGED in my life. It is almost impossible to discount the influence of the boots you were wearing at the time, that were, in turn, influenced by the work you were doing, and the lips you were kissing. Writers, too, tend to think of books that influenced their writing, rather than changed their habits, which is a slightly different kind of influence.

I am not sure whether the book I am choosing to talk about now – Tom Wolfe's The Right Stuff – did either of those things for me in a box and arrow sort of way, but I know that I am able, just thinking of the title, to feel myself reading it for the first time, in the early 1980's. I say feel because I think the books that impact us always create some kind of visceral response – the writer’s job is to spark emotion.

Tom Wolfe, with this story set in the world of America’s 20th Century “Space Race”, did just that; sympathy, anger, amusement, surprise. I still have my original hardback copy. It has survived many house moves, so the bond must be profound. The book cemented my fandom for Wolfe (first sparked by the Electric Koolaid Acid Test) and modern American writers generally, and set me – though in a creeping sort of way rather than as instant recognition – a Holy Grail Writing Goal of producing a piece of work that absolutely speaks to and encapsulates the mood of the time in which it is set, and makes the reader feel.

That Part Was True by Deborah McKinlay is out now.