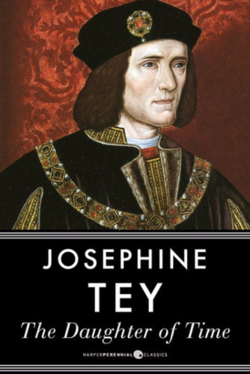 When I was seventeen, I started reading the mysteries of Josephine Tey. I picked up The Daughter of Time, expecting another detective story. When I realised it was about the murder of the Princes in the Tower, I was puzzled. I was doing A-Level History. I knew the facts. Everyone did. What else was there to discover? But I read on.

Two hours later, I finished the book, and suddenly, everything was different. History was not, as I  thought it was, a simple succession of facts that everyone knew. It was fluid, amorphous. It could be re-examined and re-interpreted. It was not just what the man standing in front of the classroom said it was.

And if that was true of history, it could be true of everything. The Daughter of Time taught me I had to learn to look beyond what I was told. I had to look at the original evidence, and the basic facts, without prejudice. If someone told me something, say, who murdered the Princes in the Tower, I had to ask myself who was telling me these things, and why, and what did they want me to believe?

The Daughter of Time taught me to question everything. That is quite a life-changing discovery for a teenage girl to make.

And for the record, I’m still not sure who murdered the Princes in the Tower.

Michelle Birkby is the author of The House at Baker Street, which is available to pre-order and is released on 25th February.