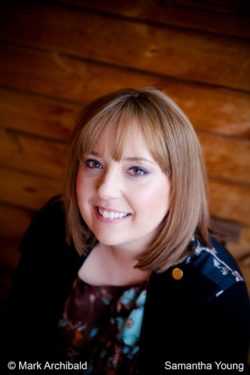 Samantha Young has written young adult fiction, new adult fiction, and adult fiction. Her latest book, Fall from India Place, is out today. She tells us why The Lion, The Witch and the Wardrobe by C.S. Lewis had such a huge influence on her life, and her writing.

There have been many books that have had an impact on me as a person and as a writer, but I’d have to say that the book that changed my life is The Lion, the Witch and the Wardrobe by C.S. Lewis. I think my mum bought it from the used books section in our local library. It was this tattered old edition with Aslan, Susan, Lucy and Peter on the cover. Perhaps poor Edmund was left off the cover because of his bad choices early on in the story…

Anyhoo, I think I had just turned eight when my mum gave me the book and by this point I was a dedicated bookworm. However, I hadn’t read anything quite like The Lion, the Witch and the Wardrobe. As soon as I opened the first page I was immersed in this other world and that had never happened to me before. It was the first book to truly pick me up and put me down in this entirely different land and introduce me to the real magic of storytelling. In this world there was enchantment, valor and adventure. The impossible became the possible and it gave me that same feeling I got on Christmas Eve – I’d wait for my parents to switch off my light and close my door and when I was sure they had gone downstairs I’d jump out of bed and rush over to my window. I’d peer out of my curtains up at the night sky, desperate to catch a glimpse of Santa’s sleigh, and I could have sworn many times as I stood there that I could hear the jingle of sleigh bells in the distance. Well, after reading about Narnia I got that same feeling of excitement. I became convinced that Narnia existed and I just had to believe in it hard enough to make it so.

I had this small wardrobe in my bedroom that was papered over in rainbows and blue skies and I spent a number of hours tapping the back of that closet, hoping Narnia would magically appear. Like the days after Christmas, though, that feeling faded after a while and the only way I thought I could bring it back was by writing my own stories. So at a young age, I picked up a pen and paper and started writing about my own enchanted lands, heroes, heroines, villains and Aslans.

And I haven’t stopped since.