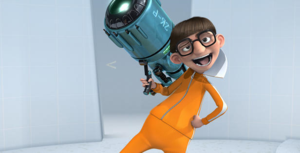 If you’re not familiar with the term, an antagonist is someone who, according to the Oxford Dictionary, ‘actively opposes or is hostile to someone or something; an adversary’.

In creative writing terms, the antagonist refers to the character who opposes your protagonist, driving the plot forward. They are the serial killer in a gritty crime book, the evil Queen in the fairy tale, the power-crazy evil genius in James Bond.

If you're writing a good versus evil story then you will find it easy to identify your antagonist (hint: it's the big baddie), but what about different sorts of stories? Romances? Thoughtful family sagas? Literary musings on the meaning of life? Will you still have (or need) an antagonist, then?

In short – probably. If there's nobody actively blocking your protagonist's goals then it is harder to (believably) stop her from achieving them. While a healthy dose of bad luck can thwart your protagonist, adding an interesting character who causes trouble is like rocket fuel for your manuscript.

Perhaps you are writing a very quiet, character-focussed piece and you think you don't have (or want) an active antagonist. I would humbly suggest that thinking in these terms can still be helpful. For example, if your protagonist is her own worst enemy and all her struggles are internal (such as low self-esteem), then it may help to envisage that side to her character as the antagonist of the story. If you imagine those character traits as a separate person who is actively working against your protagonist, it may give you ideas or help you to bring the internal struggle to life.

Whatever your plot or genre, your antagonist deserves the same care and attention as your protagonist. Make sure they are a fully-rounded character and as fascinating as the other main players. Give them a solid goal and help your reader to understand why they want it so they'll believe in the struggle.

Also, it's worth remembering that your antagonist doesn't have to be a moustache-twirling baddie. If your antagonist has goals which are in opposition to your protagonist, they can be as lovely as a kitten but still cause diabolical trouble at every turn.

Imagine this: Billy runs an ice cream shop. It's been in his family for generations and he will do anything to keep it successful.

Maria is a young journalist looking for her big break. She's investigating claims that sub-standard products are being used in locally-produced 'artisan' food, including Billy's icecream.

Maria is not evil or specifically out to destroy Billy's livelihood, but her goal (the pursuit of truth and a big scoop to secure her career on the local paper) will cause him endless strife. Plus, the harder he works to cover up his big secret (that the cream he uses is not one hundred percent organic), the harder he will make it for Maria to achieve her goal. They are locked into a battle from which only one can emerge victorious.

How about you? Do you enjoy writing antagonists? Or will you consider adding one in the future?