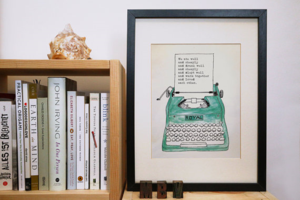 I read this on Neil Gaiman's tumblr last week:

I’m not sure I believe in subplots. There’s just the story. Sometimes it’s a big thing that moves forward; sometimes, like a river, it has streams running into it. But it should all be part of the same story, or what’s the point?

Despite the unusual start ('Subplots – The New Unicorns'), his point is an excellent one. You shouldn't think of subplots as something different or separate in your book. If they aren't an intrinsic part of your story then they don't belong.

In my first attempt at a novel, I didn't think much about subplots, I wrote the story instinctively and my only goal was to finish. It was dreadful for many reasons, but the lack of thought-out subplotting was the least of them.

In my second novel, I consciously added three subplots. I had been studying novels and novel-writing enough by then to know that I ought to have them so in they went. One of the (many) problems with that book was that the subplots didn't support the main story. You could take them out and the book wouldn't have been poorer for it, merely shorter.

During the planning, dreaming and first draft stages, try to stay flexible about what constitutes your main plot and what is a subplot. Rather than thinking in terms of 'minor characters' and 'major' or 'main plot' and 'subplot', try to think of the story in its entirety as a living and breathing entity. Every person, every detail and every event as vital and alive.

Not only are you more likely to write engaging, fully-rounded characters and plots across the board, but you leave the story free and open for as long as possible. Sometimes the plot that we think is a minor one turns out to be the main story.

Once you're at the rewrite stage, you can be more analytical. If you're not sure if a subplot is working (or adding much to your story), see if you can take it out. If you can (without major surgery to the rest of the book), it needs attention. You can either rework it so that it is more tightly bound to your main story or you can take it out completely.

Don't forget, subplots aren't just part of your story because they happen within the same document. They are part of the same story because they echo or illuminate or act as counterpoint the themes: they are a wonderful opportunity to add depth, as well as drama.