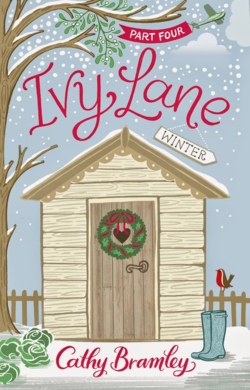 I know I'm always banging on about keeping on writing until you finish your book, but what if you've written your story all the way to 'The End' but it's only 30,000 words? Or 20,000?

Well, perhaps you've written a novella – and there's nothing wrong with that!

I strongly believe that the story should be the length it's meant to be; if you try to stretch something which is naturally a novella-length into a novel, you run the risk of writing lots of padding.

There's more good news: Novellas have been enjoying something of a renaissance since the advent of digital-publishing, with lots of people downloading and enjoying keenly-priced 'quick reads'. Publishers have capitalised on this by releasing novels in novella-length installments such as Cathy Bramley's delightful Ivy Lane series.

So, what classes a story as a novella? And how can you be sure you've written one, rather than a bare bones first draft of a novel?

Word counts vary, but if your story is between 20-45,000 words you can safely call it a novella.

It's also likely that your story will have one plot rather than a central story with several sub-plots. If you've got the latter you either need to cut some out and refocus your story, or accept that you're writing a novel after all and flesh them out properly.

With so few words, there are also limits to the number of characters and POVs you can successfully include before things become confusing or sketchy.

Simplicity does not, however, equal shallowness. Shorter fiction can be just as valuable and satisfying as longer work, and some of the most well-respected literary works of our time – such as John Steinbeck's Of Mice And Men and Animal Farm by George Orwell – are under 30,000 words long.

Have you enjoyed any novellas recently? Do you think you could write one yourself?