Can a self-published author’s perky tweets lead to a book deal? How do editors and authors make a four-part series intriguing enough to keep readers waiting for the next installment? And exactly what goes into cover design for a women’s fiction series? All of these questions (and more besides!) will be answered during this three-part Behind the Scenes at a Publishing House series with Transworld Publishing editor Harriet Bourton and Ivy Lane author Cathy Bramley. You can read part one here. Over to you, ladies. 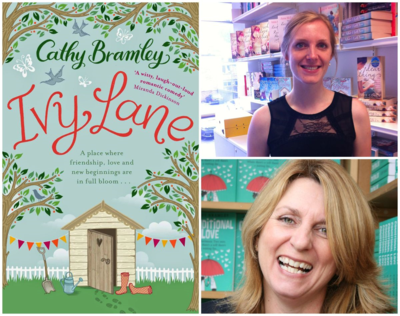 After submitting a synopsis for Ivy Lane to Harriet, I spent the next week fleshing out the basic idea. By the time I sat down to write it, I’d done a whole story plan and knew exactly what the plot was going to be. I began to write it just as if we were releasing it as a full novel but instead of waiting until I’d got to the end of first draft of the entire thing, I sent each part to Harriet as soon as I’d finished it. Which was completely nerve-racking. We had to work fairly fast because the publication date for the first part was early April, and we’d started in January.

Because Cathy had so carefully planned the story arc in advance I knew where the story would be taking me but not exactly how, so the editorial process still felt fresh and fun. The editorial suggestions I gave Cathy mainly focussed around developing character motivations and backstory.

We were also keen to always keep an eye on giving the reader enough moments of intrigue to spur them on but not frustrating them with overly dramatic cliff-hangers, since they had to wait a few months for the next part to arrive. Once we’d done the editorial work in the individual parts we also had to consider how the book worked as a whole. There is such a lovely ebb and flow to the storyline in Ivy Lane that reading it in paperback you’d never know that the book first existed as four individual parts. Once you pick it up, you just can’t put it down!

Taking in the editorial suggestions gave me lots of ideas for how to develop the characters and plot lines further. It was such fun to write and such a great cast of characters that neither Harriet nor I could bear to say goodbye to them! It was with this in mind that we had the idea to continue the story in a fresh series, Appleby Farm.

Join us on Wednesday when Harriet and Cathy will discuss the cover design process.