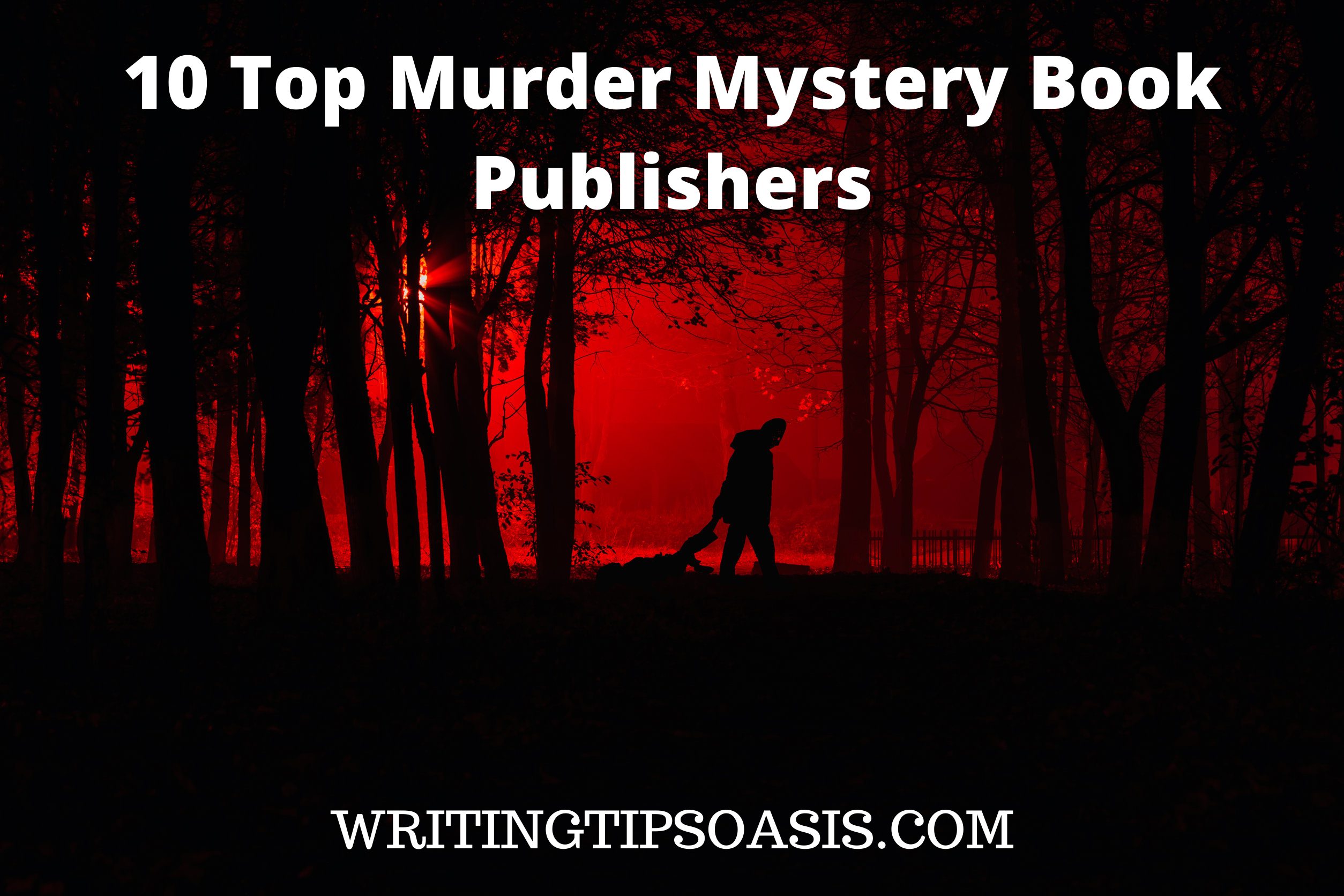 If you’re looking for a selection of murder mystery book publishers, below you’ll find 10 of the very best.

Founders Lee Goldberg and Joel Goldman created Brash Books in order to promote their love of books. The US-based publisher was established in 2014 and focuses on exciting new thrillers, murder mysteries, as well as books on espionage. Their current stable of regular writers include well-known names including Noreen Ayres, Tom Ardies and Keith Burton, among others.

Brash Books doesn’t simply publish books. They curate their selection from hundreds of entries, and remove those that do not fit their exacting standards. You will not find any cookie-cutter, stereotype-driven books coming out of Brash Books. Take a look at some of their exciting murder mysteries, including “The Juan Doe Murders” by Noreen Ayres, “Don’t Explain” by Dallas Murphy, and “Laughing Dog” by Dick Locthe.

Brash Books is accepting submissions, and writers interested in submitting to Brash Books should pay close attention to their detailed expectations, detailed on their website. Be sure not to submit only the first twenty five pages to them, formatted as a Microsoft Word document and emailed to them.

Located in Hoboken, New Jersey, Seventh Street Books is an imprint of Start SF and proudly the publisher of many mystery, thriller and crime fiction novels. The publisher has been in the industry for over five years and continues to look for new and different titles to expand its catalog in its core genres. They are happy to work with writers who create great, original works of writing.

Their commitment to writers is something that has paid off for Seventh Street Books over the years that it’s been in business. The New Jersey-based publisher has developed a reputation for keenly identifying novels with award-winning potential. Books published through them include “A Brilliant Death” by Robin Yocum, “Heart of Stone” by James W. Ziskin, and “The Necessary Murder of Nonie Blake” by Terry Shames.

Established in 1967 in London, the United Kingdom, Allison & Busby is an independent publisher with a reputation for finding and promoting books that go on to enrich the lives of countless readers. In addition to focusing their efforts on discovering and publishing great literature, Allison & Busby also makes it a point to work alongside writers to make it worth their while to continue producing excellent books.

Allison & Busby publishes both fiction and non-fiction books, including books on self-improvement and true crime, as well as crime, mystery, literary fiction and romance. They’re responsible for books including “Old Sins” by Aline Templeton, “The Pimlico Murder” by Mike Hollow, and “Murder on the Mauretania” by Edward Marston.

Allison & Busby is happy to consider submissions through a literary agent, and they continue to be open to proposals. Unfortunately, they ask that writers not contact them directly, so that they can screen manuscripts that come their way more effectively.

From mystery and suspense to romance, historical fiction and non-fiction books, Bella Books is a publisher that recognizes a need for women to have books published for women and by women. The publisher is committed to a community of open-minded readers and authors that represent the LGBTQ community and other members of society who may feel that books released by more traditional publishing houses do not fully represent their perspective in life.

Bella Books delivers their published novels in paperback, audiobook, and ebook format. They’re also active in translating successful manuscripts into different languages, to ensure the greatest range of distribution possible. Fans of murder mysteries should take a look at some of their published novels, including “Legacy in the Blood” by Catherine Maiorisi, “Beyond the Smoke” by Stacy Lynn Miller, and “Unbreakable” by Cari Hunter.

Bella Books has a range of genres that they are interested in. For writers who are working on a manuscript that might fall into one of those categories, including mysteries, Bella Books has clearly detailed what they require from submissions on their website, including an email, cover letter, and book summary.

A member in good standing of the Mystery Writers of America (MWA) and the International Thriller Writers (ITW), Camel Press is a notable publisher operating out of Kenmore, Washington, in the United States. An imprint of the well-known Epicenter Press, Camel Press focuses on being an opportunity for publication for popular fiction, including mysteries, thrillers, romance, and historical fiction.

Mystery books that Camel Press has helped bring to the publication include “Dead Write” by Susan Richards, “The Cruelest Cut” by Gene Rontal, and “Dead as a Duck” by Colleen J. Shogan. The publisher continues to look for entries that will be a positive addition to the imprint’s current catalog of books.

Considered one of the United Kingdom’s top independent publishers, Joffe Books has been one of the most reputable organizations in the industry since being founded in 2014. Established by founder Jasper Joffe, the organization was recognized for its excellence and shortlisted for Independent Publisher of the Year in 2020 and 2021.

Averaging over two million books a year in the last couple of years, Joffe Books continues to actively look for new and valuable gems, in many different genres. Categories that they actively look to publish include mysteries, crime fiction, historical fiction, and romance novels. For an idea of books that they’ve published in the past, look into titles such as “Murder at the Country House” by Jane Adams, “Death by the Thames” by Gretta Mulrooney, and “Her Perfect Secret” by T.J. Brearton.

Joffe Books encourages manuscript submissions from published writers and literary agents. Their submission guidelines require a short self-introduction and a copy of your book in its entirety sent as an email to the publisher.

Owner Maggie Topkis brought Felony & Mayhem Press to life in New York, USA, in 2005 as an answer to her own professional frustrations. After years of experience as a bookstore owner who wanted to resolve the endless challenge of sourcing quality books, she took it on herself to set up Felony & Mayhem Press to do everything that she had been looking for.

Felony & Mayhem Press is a publishing house that is passionate about great mystery novels. They publish everything from historical mysteries, British mysteries, foreign mysteries, traditional mysteries, mysteries that were designed for a light read, and some that are a bit more bloody and violent in nature. “The Blood Whisperer” by Zoe Sharp, “Zaddik” by David Rosenbaum, and “Paganini’s Ghost” by Paul Adam are a few novels that are worth looking into.

Felony & Mayhem Press’s submission policy is specific in mentioning that they are only open to mystery fiction for adults. They have clear manuscript guidelines that they expect writers to follow, including a minimum word count, that the manuscript should be submitted by email, and that it should be formatted in Word or PDF.

Founded in 2010, Black Opal Books is proud to be an active publisher of reading material based in the United States. Associated with both the International Thriller Writers and Mystery Writers of America, writers interested in publishing through Black Opal Books can rest assured that they’re working with a reputable organization.

Black Opal Books produces reading material in both paperback and ebook format. Their books include entries in genres including young adult, mysteries, thrillers, women’s fiction, and non-fiction. Look into some of their recent releases, such as “Whisht Hall” by Jane Jordan, “The Innocent Hour” by Nancy A. Hughes, and “The Woodstock Murders” by James D. Robertson.

The publisher accepts books between the first of June and the end of the year and is specific about only accepting manuscripts for mysteries, thrillers, chick-lit, and women’s fiction, and young adults. Look into more of the more specific details listed on Black Opal Books’ website!

Polis Books is a book publisher that was started in 2013 by founder Jason Pinter. They aim to be a progressive voice in the publishing industry and introduce books to the public that provide high-quality, alternative perspectives. The books they publish include thrillers, suspense, romance, and mysteries, both cozy and murder mysteries, among other subcategories of the genre.

The commitment that Polis Books has towards publishing excellent books extends to their launching a new imprint, Agora, to specifically focus on crime fiction, in addition to the other genres that Polis Books is freed up to focus on. Books that Polis Books has published in the past include “The Red Canoe” by Wayne Johnson, “Arya Winters and the Tiramisu of Death” by Amite Murray, and the “Hiding Place” by Meghan Holloway.

The publisher is happy to announce that they are currently interested in new manuscript entries in a number of different genres, including mystery, thriller, suspense, science fiction, and fantasy. Their guidelines require writers to include a query letter, three sample chapters, and a biography, to be submitted via email.

Situated in Toronto, Canada, Essays on Canadian Writing, or ECW, was originally a publisher that was dedicated to the publishing of essays and non-fiction writing that reflected Canadian writing. Since those early days since its founding in 1974, the organization has expanded and now is proud of the wide and eclectic whole range of fiction and non-fiction books in its full repertoire.

Today, ECW publishes literary fiction, mystery, science fiction, and books for young adults, as well as non-fiction biographies and true crime, poetry, and books on sports and pop culture. Look at “An Image in the Lake” by Gail Bowen, “What’s the Matter with Mary Jane” by Candas Jane Dorsey, and “The Keening” by Anne Emery as a number of quality examples of the published books that ECW has been responsible for.

ECW is open to accepting manuscripts, but please note that they are only able to accept fiction submissions, including manuscripts for murder mysteries, from Canadians only. Their guidelines ask for writers to email their bio, a sample of their manuscript, and a cover letter to the company for consideration.