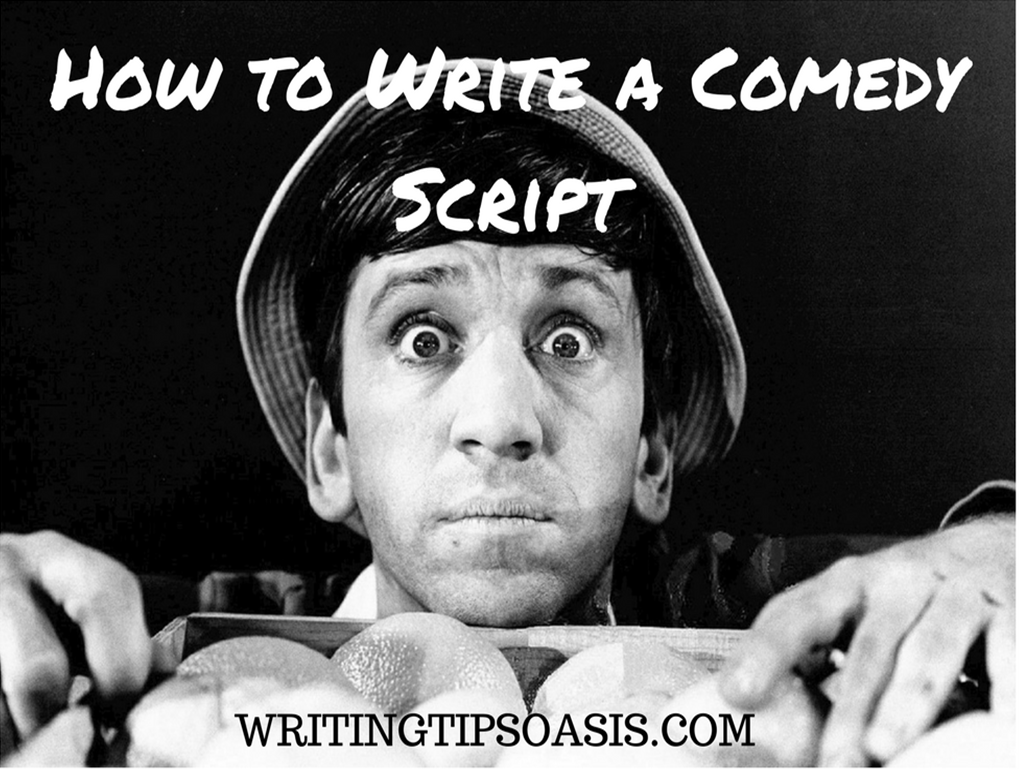 Writing a script for comedy can be an intricate process. There’s a long way to go from the moment you conceptualize an idea to the moment that idea is realised.

And that’s the purpose of this guide – to provide you with guidance on how to write a comedy script.

(This guide assumes that you have already got the general idea of what you’re going to write about.)

Understanding what a script is

So, you’ve had a killer idea for a comedy TV show, film or play and you want to start scripting it.
What is a script? A script is everything: all of the elements – audio, visual, behaviour/movements and dialogue – that are required to tell a story through movies or TV.

Over the course of this guide, hopefully you will get a clearer picture of how to go about putting together a script for your idea.

A good place to start is by looking at other scripts. This will put you into a script-writing mind-set.

You don’t have to source new scripts – find one for your favourite movie or television show. You will gain access to many of these online, simply search for a title’s script. Examine it carefully, the way it is written: descriptions, dialogue, actions.

As you are reading through the script, try and envision how each scene plays out. If you go back and watch the material, it will more than likely closely resemble the script in terms of dialogue, location, behaviour and aesthetics.

Think about how you could apply this to your own script – putting down exactly what you want to get from your idea, and how it should play out. 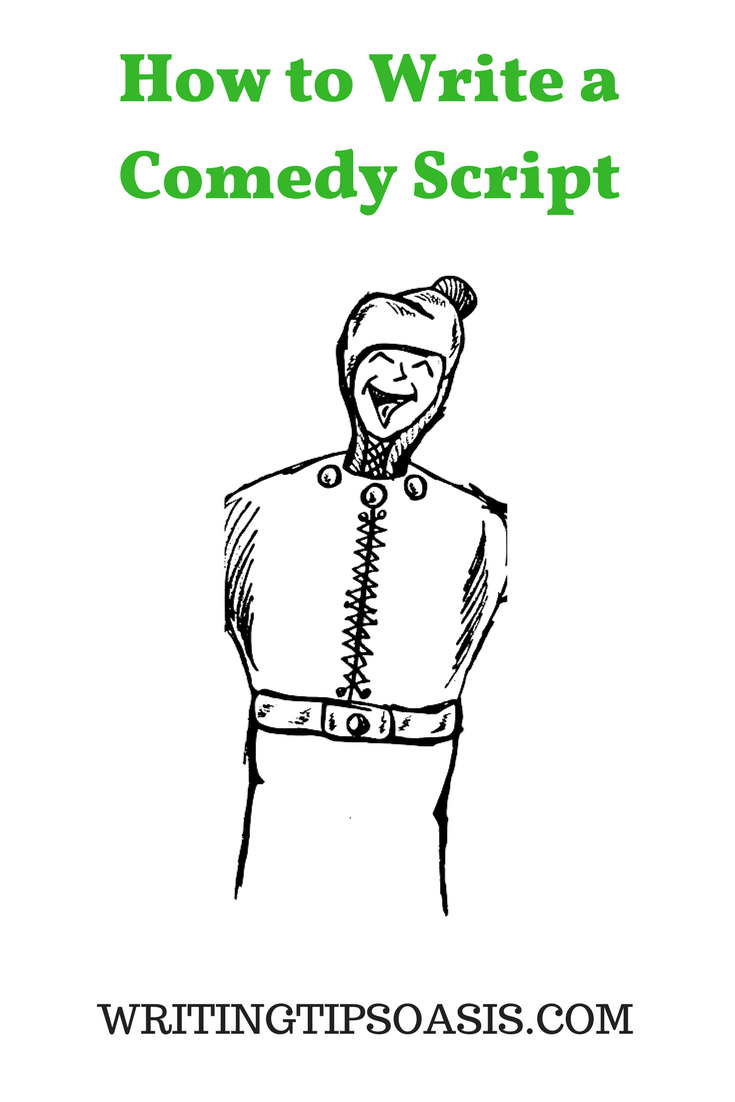 The technical stuff – formatting your script

Your set directions, dialogue and scene details need to be descriptively explained and clearly formatted in your script.

For many creative types, the formatting is an afterthought, but look at any script and you’ll realise that there’s a protocol which you’ll need to follow to make your text universally followable.

The technical aspects – like page size, font, indentations, emboldened words – should remain consistent throughout, so decide on how you’re going to lay the script out, and continue to do so throughout.

A great idea is nothing more than an idea until you’ve fleshed it out as a concept. It’s a great starting point to have the idea – at least you have some indication of where you will end up. It’s a matter of finding out how you go about turning your idea into fruition.

You can work forwards or backwards as long as you have some form of starting point. This could be an integral part of the script, or even a minor joke that you want to feature – it’s still a starting point that you can expand upon.

Think audio and visually – what will sound and look good. Will it work with your idea? How could you make it more so?

Write down everything that you would like to happen within your script as a rough exercise – you can refine it later.

Once you’ve got at least the essential elements of what you want to happen in your script noted, you can begin to put the story together.

Every script should have 3 components – a beginning, a middle and an end. It might seem cliché and obvious, but sometimes looking at your story in 3 parts can be very helpful.

What’s important at this stage above all-else is that you’re figuring out what happens and where it happens within the script – don’t get bogged down in the minute details of the comedic elements of the script, they can come later.

Your introductory part should do just that – introduce the viewer to pretty much everything. The characters, the setting, the tone and at least part of the story. This part needs to be very strong as it will be the part that catches people’s interest. If someone doesn’t like the beginning of something, they mightn’t see it out until the end.

In a comedy script, it’s important that what makes your characters “funny” is evident from an early stage. Think of all your favourite comedy shows and movies – within the first scenes, the tone for the character and the production has been set. With this being the case, it’s integral that the beginning of your script is very strong.

That’s not to say the next two parts aren’t either! The middle section is the longest and is, without putting it too bluntly, the means of getting from the start to the end.

Your middle section of the script takes what you’ve set up in your first section, and takes your characters on some form of journey (doesn’t need to be a literal journey).

In a comedy script, this part of the story is where you can fit in parts that simply won’t work in the intro and conclusion. Character development can take place during the middle section, and there should be continuity throughout (presuming that’s what you’re going for).

Once you’ve reached the final section of your script, it’s time to tie things up. Thinking about your favourite comedy shows and movies, this usually ends in some form of a resolution.

In a comedy script, character is essential. Again, thinking of your favourite productions, I’d wager you were drawn to them by the characters – Ron Burgundy, David Brent, Chandler Bing – interesting and relatable characters can be the making of a classic comedy (that doesn’t mean they can’t be ridiculous).

Some things to take into consideration when forming your characters – make your characters “human”. A lot of comedy is routed in relatability, so at least some characters in your script will need qualities that resonate with the audience.

Characters are probably more important than anything else. The setting can come completely after the characters have become formed.

Another important element of choosing a setting for your script will be how plausible it will be to pull off – is the location you want possible? Would it be safe to film there? Questions like these are the bane of creativity but should be considered nonetheless. Ideally, the less locations necessary, the better.

The story’s blueprint is there, now you’ve got to begin adding the elements that will bring it to life. A comedy script needs some comedy, that should be a given.

What kind of comedy is up to you – it could be slapstick and outrageous; or subtle; or a blend of both. That’s up to you to decide.

Once you’ve got your characters, your setting, and an idea of how you want to story to play out, you can begin looking at the project with a view to adding laughs wherever possible.

Comedy can be found almost anywhere, so think carefully about what you want your characters to do and how that could be funny. Sometimes it can be something as simple as a funny action that will brighten up a sequence.

Don’t oversaturate your script with jokes. Oftentimes, one particularly good bit is better than 5 average bits.

You know your story and you know where the comedy is going to come from, now it’s time to start writing the scenes. I suppose when you think of a script, you think of a collection of scenes, so this is an integral part. Even though it’s a big part of the script creating process, you already have the bulk of the work done, it’s just a matter of articulating it.

Although you’re putting your story into acts, and then your acts into the scenes, you don’t necessarily have to have solidified your dialogue at this point. Also at this stage, don’t limit yourself to writing something because you think it will be too much or takes too long – excess content can be dealt with later.

Dialogue – at least in part – can be left until closer to the end of the script-creating process. This is especially the case with comedy writing, as your dialogue will need to be refined repeatedly so that your comedic elements have the maximum amount of desired effect.

Obviously, the type of tone you’re going for will influence the dialogue. As a writer, it’s important to understand how important dialogue can be in a script. If it’s too cliché or cheesy, it will be immediately obvious to nearly everybody reading it. It doesn’t need to be overly-complicated, but it must be interesting and succinct.

Dialogue can be used as a majorly defining feature of a character. An audience will base their perceptions of a character based on what they look like, and what they say. Take this into consideration when adding dialogue to your scenes.

As mentioned in the comedic sequence section, watch out for joke over-saturation when writing dialogue. There’s nothing wrong with laughs coming thick and fast in a comedy script (in fact, it’s generally encouraged) but it can be better to have one memorable large pay-off as opposed to a few hit-or-miss bits.

So, at this point you’ve got: Characters, settings, scenes and dialogue – you’ve got a comedy script. The problem at this stage, is there is almost definitely too much content. You’re going to need to cut down on some of your ideas, or perhaps remove entire scenes.

Begin cutting away what’s not needed. This is easier said than done – after writing it, and putting your heart into it, it can be difficult to cut. However, for the sake of the script you’ll have to put your pride to one side, be ruthless, and edit.

Analyse your story and scenes and see what is necessary and must stay and what could potentially go. Is a scene not funny enough? Not completely relevant to the story? You might need some help with coming to these conclusions, and this is where the next part of the process comes in.

A second opinion will be essential for your script. It’s very easy to become disillusioned with your story and characters, and what’s good in relation to them and not, so getting an outside viewpoint will hopefully give you an indication as to what people who aren’t you might think.

You’re going to want impartial, constructive feedback on your script from someone who’s opinion you value. What do they think? Is it good? Is it funny? What’s good/bad? Would they like it if they came across it on their television? Could they see it being a reality? What would they change? So many questions, that you’ll only get the answers to if you share it around.

Tell them to be honest and to tell you what they think – even if it’s negative. It might hurt when they say parts of your script are weak, but it will help in the end.

When you’ve got feedback on your script, it could potentially be time to refine once more. Take what you’ve been told, what works, what doesn’t and improve your script where possible. Do this as many times as it takes until you’re truly satisfied with the finished product.

Hopefully by this stage your comedy script is approaching completion. Once you’ve got the finished script, it’s up to you what you choose to do with it, but at least it’s written.

Writing a comedy script can be a difficult process, especially starting out. It can be difficult to articulate your ideas in a funny way in a script, but the more you do it, the more proficient you will get.

Want to learn about writing stand-up? Take a look at our post entitled How to Write a Stand-Up Comedy Routine.